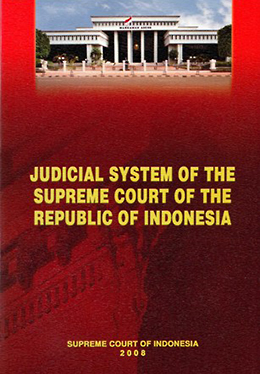 INTRODUCTION -  Indonesia is a unified republic gaining it independence in 1945. Currently it is inhabited by more than 240 million people from different ethnological, social, religious and cultural background, The territory comprises of some 17,508 islands spanning

over 3,000 miles. Majority of the citizens is Muslim making around 85,2% out of total population, making Indonesia the biggest Muslim nation in the world. Others are Protestants (8, 9%), Catholics (3%) Hindu (3%) Buddha (0, 8%) and others (0, 3%). Coming from different ethnic group, the wonder of Indonesia phrased up in its official motto “Unity in Diversity” (Bhinekka Tunggal Ika) of the Pancasila.

As a result of the Dutch colonial administration of justices, the Indonesia legal system inherits the civil law system. In addition, the legal system which basically was derived from the Civil Law system (Continental System) has also been influenced by the local Adat Law (Customary Law) and Islamic Law, specially, the field of civil law, in the latest development, the common law has shown its influences, especially in relation to commercial and business law.

After the reform era in 1998, many regulations and institutions which were deemed to be inconsistent with the spirit of democracy as so contained in the 1945 Constitution have been reformed, including those regulations concerning judiciary. Some amendments have been made in the Constitution to provide more definite and clear protection on human rights of the citizen and the independence of the judiciary.

(1)  The judicial power shall be independent and shall posses the power to organize the judicature in order to enforce law and justice.

(2)  The judicial power shall be implemented by a Supreme Court and judicial bodies underneath it in the form of public courts, religious affairs courts, military tribunals, and state administrative courts, and by a Constitutional Court.

(3)  Other institutions whose functions have a relation with the judicial power shall be regulated by law.

The elucidation (explanation note) to this article reads:

The judicial power is an independent power, which means free from the interference of the Government. In this connection the status of judges must be guaranteed by Law.

Articles 24 A (3) of the amended Constitution:

Candidates for Supreme Justice is recommended by a Judicial Commission to the Parliament for approval and then decreed by the President.

The Supreme Court remains as the apex of judicial power over the existing four court jurisdictions, namely, the general court (which hear and decide on common civil and criminal cases), Religious Court, State Administrative Court and Military Court.

Prior to the Law Number 35 of 1999, the administration of the court system was handled and supervised by the executive. This included the transfer, the promotion, and the remuneration of the judges. This system had been generally criticized of its potential abuse, to the independence of judiciary. By Law Number 35 of 1999 was replaced by Law Number 4 of 2004 on Judicial Power which further strengthen the independence of the judiciary.

The notion of Constitution to protect citizens from arbitrary acts is implemented by other subordinate regulations. Several universal human rights principles were adopted in the Law No. 4 of 2004 on Judicial Power, to guarantee judicial independence, fair and prompt trial, as well as in order to protect the rights of the accused and victims.